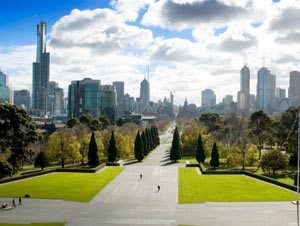 The portal's latest At a Glance infographic compares activity surrounding Australian real estate on the site in the 12 months to July 2015 to the same period two years earlier. Over those two years, Australia's property market has seen foreign investment rise to the point where it has become a controversial topic of discussion, as some fear that overseas buyers are causing local buyers to become priced out of the market.

During that time, Melbourne has replaced Perth as the most sought-after hotspot for investors. The city accounted for 7.7 per cent of all searches by location on TheMoveChannel.com in the 12 months to June 2015, ahead of Sydney (6.4 per cent), which held onto its second place. Perth fell to third place, with 4.6 per cent of all location searches, ahead of fourth place Adelaide (2.9 per cent) and fifth place Brisbane (2.7 per cent).

Brisbane was only the fifth most popular location in the country, but Queensland's appeal appears to be broader than other states: while New South Wales' demand was driven by Sydney and Newcastle (both in the top 10 searched- for locations), Victoria, South Australia, the Northern Territory and Western Australia only accounted for one of the top 10 each. Queensland, on the other hand, was home to four of the top 10, including Cairns, Kilcoy and Russell Island.
The infographic also charts buyer activity on Google for Australian property. Searches for Australian property have declined in the past two years, although searches for the keywords "Australia property" and "property for sale in Australia" increased in March 2015 and May 2015 compared to the same period in 2013. "houses for sale in Australia" is the most popular keyword, with other property types rarely searched for.

TheMoveChannel.com Director Dan Johnson comments: "Australia's Gold Coast is a huge draw for internatinoal tourists. That wave of interest has washed over into the rest of Queensland, with the state now dominating overseas investment activity in Australia. The coastal area of Queensland specifically made up two of the top 20 searched-for locations.

"Melbourne, though, is the dream destination for many lifestyle buyers: the city was just ranked the best city in the world for quality of life, adding to its existing appeal. As Australia's main cities heat up, with prices rising in Sydney and Melbourne in particular, buyers' tastes are becoming increasingly diverse, with searches spreading across a wider range of locations in 2015 compared to 2013. This has been encouraged by more listings becoming available on TheMoveChannel.com, with Down Under increasingly climbing the global popularity chart as both an escape route for expats and a profitable place for investors. Wherever they are hunting, though, foreign buyers remain specifically interested in houses over other types of property."