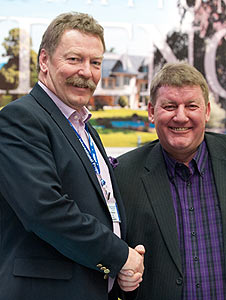 For outsiders Russian market looks rather balanced but actually it can’t be so. There’s a sufficient difference not only between town and country (this kind of difference is an everyday occurrence which can be found in every country of our world) but even between two biggest Russian cities — Moscow and Saint Petersburg. That is the most widespread opinion inside Russia. Is it true or just a fixed belief which has nothing to do with reality?

This spring was marked with two big events — two International Property Shows which were organized by aigroup and held both in Saint Petersburg and in Moscow. These shows were one of the best places to get convinced of or — in a contrary — to deny the difference between two cities. Let’s take a look onto the two most popular myths (or facts of reality?) which are been used to be thought of Moscow and Saint Petersburg.

Moscow is richer than Saint Petersburg

Of course it’s true. This fact can be explained very simply: the capital is always richer — it’s the unwritten law of the whole world. However, this myth sometimes developes into the very strong opinion which runs as follows: it doesn’t make any sense to take part in a property show in Saint Petersburg especially if you aim to find a client for a property worth of ?6M — 10M. This point of view can be both true and false.

True — because a chance to cut such a great deal in Saint Petersburg is rather illusive.

False — because a chance to cut such a great deal in two days is rather illusive somewhere else — both in Moscow and St Petersburg, London and New York, Paris and Dubai.

If we look at the matter from a different standpoint we can’t ignore the experience of the Real Estate Agencies. It was noticed by some of the participants of the Show that the deals in Moscow are actually worth of bigger sums of money than in St Petersburg. During the Moscow Show I talked to a manager of one company from Spain. It’s not a secret that Spanish property is an absolute bestseller in Russia in a last few years. The manager confirmed that clients in Moscow were interested in a more expensive kind of property. For example during the last Moscow exhibition she managed to sell three villas in Spain whereas for the whole time (4 years) of taking part in St Petersburg’s Show the number of sold villas hadn’t been exceeding one and the 99% of all demands tend to concentrate at the middle-sized and middle-priced apartments.

Can we consider this kind of interview as an exact reflection of a difference between two cities?

Of course we can.

Although I’ve made the another very interesting observation. The participants who had no idea about all these talks about special features of Moscow and St Petersburg didn’t notice anything at all. They said solid that the Show was equally succesful in both cities.

Geography plays the most important role while choosing a property to buy. It means that people in St Petersburg tend to buy objects in Scandinavia and Baltic States.

Although is a geography the only reason which makes people from St Petersburg to look to the North more than to South or East? Kim Waddoup, CEO of aigroup, is sure that it is not. The main reason of popularity of Sacandinavian property among Petersburgers, as Mr. Waddoup says, is simplier and is concealed in the limited possibilities for travelling abroad from that city. The only Petersburg airport Pulkovo is very small for such a big city and can’t serve all the demands of citizens. That’s why travelling both by car, ferry and train is so widespread in St Peterburg. So where can you go by any of these mode of transport?

The another fact which destroys the opinion that St Petersburgers are the main consumer for Scandinavian and Baltic property is concealed in the experience of the players of the property market who has alredy worked both with Moscow and St Petersburg. Their point of view on this matter can be expressed into the simple phrase: “Petersburgers are craving for Scandinavian and Baltic property but they can’t afford it.”

This statement comes in a particular way as a contrary to the previous Myth (or, if to be more precise — to the arguments which were presented to rethink that Myth).

Ok, let’s concede that Petersburgers are enough wealthy to afford a 200 sq. metres cottage on the lake shore somewhere in the Southern Finland. The another objection which can be made is the fact that for St Petersburg Finland is not more than just a neighborhood where you can spend a couple of days — not more; whereas for Moscow Finalnd is a kind of undiscovered exotic place full of mystery where people want to spend a long holidays.

These were just two the most widespread opinions which can be heard both in Moscow and in Saint Petersburg during the Property or a Fashion Show, from the citizens of both cities.

What I noticed while strolling along the stands on the Show was the fact that Russian market and the consumers’ demands were the most unpredictable things in the world.

For example, there was a family who came to the Show with a goal to find an offer for buying a property in Finland. When they were leaving the venue where the Show was held they were discussing whether to buy a villa in Panama or a cottage in Finland. Please believe me: such a strange (for a foreigner) conversation could have place in any Russian city, and it is the feature which characterizes and unites even Moscow and St Petersburg — two historically competitors.