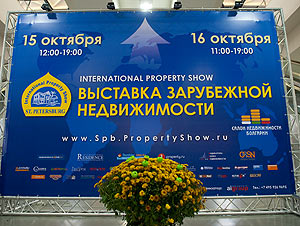 The most important overseas property exhibition in Russia's second largest city took place last weekend. St. Petersburg boasts a population of 4.8 million inhabitants has become the new star on the overseas property show circuit with many international developers returning, keen to seek new leads and meet potential buyers. They were not disappointed as more than 6,500 streamed through the doors for the two-day event.

Naturally, as the main media sponsor, International Residence, Russia's leading overseas property magazine was again out in force with a large stand, copies of their last issue and a team to survey the wishes of overseas property buyers in St. Petersburg.

The market in St. Petersburg has matured extremely fast and is now on a level with Moscow. However, due to the location in northern Russia, potential buyers are showing interest in different destinations and the survey in St. Petersburg was designed to explore the differences between Russia's leading cities.

— 66% implied that their primary interest was for private residential real estate abroad, only 5% indicated an interest in overseas commercial property. A further 29% were undecided and indicated that they were looking for the best returns.

"Reading the results of our surveys enables us to understand the different mentalities in these cities and to be able to assist our advertisers accordingly" — stated Nataly Kovaleva from International Residence Magazine. "We are now preparing for the last events of this season, the Global Edge Russian Summit and the Moscow International Property Show in central Moscow in November. We will continue to interview the visitors and will present our final statistics at the end of the year".

Russia's aigroup offers full services for overseas property developers and agents to promote themselves directly to Russian buyers. With nearly 20 years of experience in the industry, aigroup is highly qualified to offer effective marketing solutions in order to penetrate the growing group of Russian buyers.