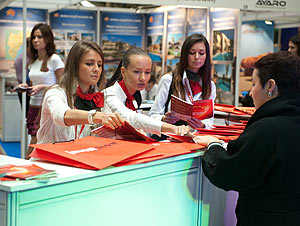 The VII Moscow International Investment Show traditionally organized by aigroup was held in Moscow at TC Tishinka. In expert opinion, the show that lasted two days, on October 1st and 2nd, was a success, judging by the number of exhibitors - 172 companies displayed properties from 30 countries - and by the number of visitors (this time around 6,440!).


Season-breaking autumn shows are deemed most challenging by organizers. The reasons are obvious: the market is still "slumbering" and buyers are not ready to make decisions. "We had to put great organizational effort that everything might go fine and at a high level, - notes Kim Waddoup, president of aigroup, - but we were ready and adequate to the task." Statistics is the best evidence of Moscow International Investment Show's success: properties from 30 countries were presented by 172 participants and the number of visitors neared 6,440.

It should be noted that the total number of participating companies is more or less stable and more depends on the holding capacity of the exhibition hall at "Tishinka." As follows from the responses of participating companies, the balance of participants and visitors is optimal at TC "Tishinka." "We participate only in aigroup company's exhibitions in Russia, - says Olga Wolf, sales director of IPC, - and we always see the feedback." Among the first results of the Investment Show are the already submitted requests for participation in the next show. Representatives of some companies said they had already concluded preliminary agreements, which is a clear sign of the show's efficiency.

Experts point out that The VII Moscow International Investment Show did not reveal any new trends. Bulgaria is still the most popular destination - it is enough to mention that the organisers held the Bulgarian Real Estate Salon in a detached pavilion, where the stands of 51 companies were accommodated. Montenegro goes on demonstrating remarkable growth - evidently, the analysts who predicted that this destination would take the lead in the nearest years had weighty grounds to do so. But on the whole, the list of top destinations has not changed: Spain, Turkey, Cyprus, Italy, Greece, Egypt, and France. Eastern Europe - Czech Republic and Hungary, in particular - is getting ever more popular. During the next 2-3 years the said destinations will most likely strengthen their positions in the Russian overseas property market.

Reviewing the results of the Moscow International Investment Show, aigroup president Kim Waddoup noted that "the situation is getting clearer on the market and this certainly has a favorable effect upon the potential buyers and investors." In his opinion, it should be emphasized that "now people better define their objectives and understand why they want overseas property; this is why they are interested in its acquisition."