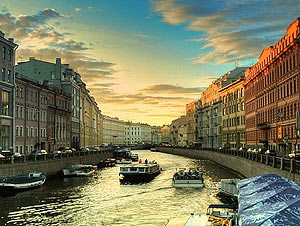 Since the time the economic reform started, St.Petersburg has been perceived as an uneasy location for real estate business; not due to any particular economic or political factors - it's the St.Petersburg consumer: demanding, with specific taste and preference, not inclined towards hasty decision-making. It is difficult to stay in business in St.Petersburg, especially in such segment as exhibitions. However, aigroup is currently preparing for the fifth International Property Show in St.Petersburg, and the previous events were a definite success - which tells us the concept and targets set were right.

It might seem surprising, but event idea was born in the beginning of the current crisis. It seemed quite risky to launch international property exhibition in Fall 2008; however, the aigroup CEO Kim Waddoup then said, "exactly when people have no idea where to invest the funds available, you need to approach them with attractive offers". And the offer to invest (sometimes modest) capital in international properties seemed logical and lucrative to many.

Back in Fall 2008, visitor count reached 4,000 - a great result for the skeptical St.Petersburg. It should be noted that those were not just curious strangers. Exhibitor representatives pointed out they were pleasantly surprised by the audience quality: most guests knew what they were looking for and asked very relevant, specific questions. The offers were also well matching the good demand: 150 exhibitor companies offered properties in over 30 countries, from popular destinations like Bulgaria, Turkey, Spain, Egypt and Cyprus to such exotics as Dominican Republic, Panama and Barbados.

Most experts currently forecast industry difficulties in 2009. Despite many analysts speaking of near end of the crisis, there is massive amount of work to be done to even approach the pre-crisis levels.

On the other hand, life goes on: people are still traveling, starting businesses, invest their capitals and continue to purchase international properties. The 2009 aigroup exhibitions were still a success. The company organized two exhibitions in St.Petersburg in 2009, and, with each event, the number of exhibitors and visitors grew. New destinations were also introduced. For example, Montenegro properties are generally met with interest all over Russia - in Moscow, St.Petersburg or the regions, but some offers were clearly targeted towards the local investor.

In Autumn 2009 and Spring 2010, Baltic companies made a very bright appearance at the event with dozens of quality, attractively priced properties in Latvia and Estonia. Our Finnish neighbors also reported good results at the show, pointing out that Russians generally have a very positive stance on Finnish developers, and St.Petersburg residents, in particular, are most active in Finnish properties market, being already familiar with this country and its people.

aigroup would like to reiterate that exhibitions not necessarily must result in maximum sales, as the only purpose of the event. The events in St. Petersburg managed by aigroup always include seminars on specific markets and destinations, as well as financial and legal consultations. Those additional services provide the visitor with the best access to answers they require, while helping the exhibitors to present the most complete information on their activities and services.

The autumn show in St.Petersburg is scheduled around the time that is traditionally seen as the market awakening after a summer stagnation period. The International Property Show, scheduled for October 15-16 2010 at the "Lenexpo" exhibition center, is already stirring up some great interest, considering the fact that experts predict a full awakening of the real estate market in 2010.