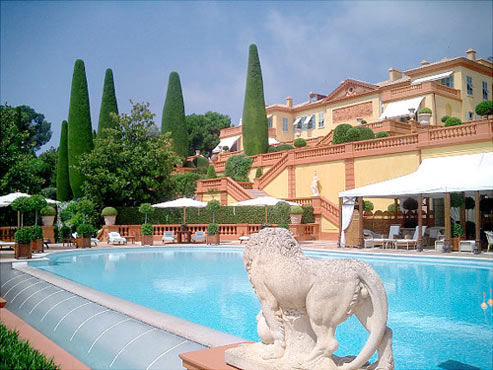 A mysterious Russian billionaire has trumped his big-spending rivals and broken a world record by splashing out ?500 million (£392 million) on one of the most sumptuous villas on the French Riviera.

The price of the Villa Leopolda, a Belle Époque mansion on the heights of Villefrance, has amazed estate agents but fuelled local worries that the invasion of Russian money on the Côte d'Azur is getting out of hand.

Since the early 1990s, Russian oligarchs, drawn by memories of the Riviera-mad old Russian aristocracy, have been piling into seaside properties at Cap Ferrat, Cap d'Antibes, Saint-Tropez and the other great playgrounds.

None, however, has come near the price with which the unnamed Russian clinched the Leopolda deal with Lily Safra, the widow of Edmond Safra, a Lebanese banker who was killed by an arsonist's fire in Switzerland in 2003.

Mrs Safra was said to have held out for months as the buyer raised his bid for the villa, between Nice and Monaco, which King Leopold II of Belgium acquired in 1902.

The previous record for a house was said to be the £57 million that Lakshmi Mittal, the steel tycoon, paid for a property in Kensington Palace Gardens in 2004. The macho spending contest by Russian oligarchs is making property agents giddy.

Jean Pierre, a high-end agent, said: “It's completely surreal and we are really uneasy. We don't dare any more to propose any price below ?100 million for these clients. Anything below and they throw you out...and you should see how they do it,” he told Le Parisien. The Nice Matin newspaper said: “At this price tag, we are beyond luxury and even reality.”

Russian excess is feeding discontent among poorer people. Pierrette, a housekeeper for one Russian, said: “I attended a party where the guests had fun throwing burning ?500 notes into the air while everyone split their sides laughing. The domestic staff were later told to collect the ashes. It was sickening.”

Jean-Marie Tarragoni, a Nice property manager, said that the Riviera market had gone mad. “Two hundred people are completely destabilising it. These Russian oligarchs have thrown themselves into a bidding war like Onassis and Niarchos.” Rivalry between Aristotle Onassis and Stavros Niarchos sent local prices rocketing in the 1950s.

The price for the Leopolda, which once belonged to the late Gianni Agnelli, the Fiat tycoon, has dwarfed the ?20 million paid six years ago by Roman Abramovich, the Chelsea Football Club owner, for the semi-derelict Château de la Croë. Mr Abramovich is lavishly restoring the château, home to the Duke and Duchess of Windsor after the Second World War.

His staff have denied local rumours that he is the buyer of the Leopolda, which has a commanding view of Cap Ferrat and the Mediterranean and is often listed as one of the world's most desirable residences.

Regulars at parties in the Agnelli years there included Frank Sinatra and Ronald Reagan. Its turreted mansion and two guest houses sit in 20 acres of grounds with hundreds of olive, cypress and lemon trees tended by 50 gardeners. Former members of the Israeli special forces are said to ensure Mrs Safra's tranquillity there. She moves out in September.