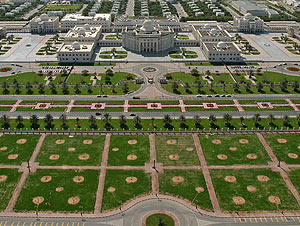 Today, as we witness the rapid transformation of the global political and economic systems, it is time to reassess Russia’s economic relations with Arab countries.
Historically, our country’s relations with the Arab world have been a significant part of global politics, a foremost arena of rivalry and competition between the superpowers of old times. Tsarist Russia was not directly involved in Arab affairs, although it had stiff relationships with Britain over its Muslim populations and lands in Persia and Central Asia. But the Soviet Union was very active with the Arabs, providing political, military, economic and ideological support to selected countries in the region.M

Hence, Russia is not a newcomer in some parts of the Arab world. Egypt, Syria and Iraq, among other countries, received huge economic aid during the Soviet period. Entire industries have been built from scratch in these countries with the help of Soviet specialists. Yet, other Arab countries, particularly in the Gulf region, kept political and economic relations with the Soviet Union at a minimum level due to ideology and Cold War politics. At that time, the Gulf countries emerged as significant players in the global energy and direct foreign investment markets.

Today, the situation is quite different. Ideology is no longer an obstacle or an advantage for cooperation. Practical considerations prevail over political agenda. This attitude is shared by the Russian leadership and the ruling elites of major Arab partner countries. In addition, Russia’s population with almost 20 million Muslims is also a factor that brings Russia and Arab countries together and results in closer economic and social ties between the countries. Moreover, in some cases, Russia’s Muslim regions are attempting to develop direct economic relations with Arabs by advancing trade and investment opportunities and participating in various business promotion events.

The need for economic diversification is another factor that can provide for closer cooperation between Russia and Arab countries. Even the wealthiest Arab countries have to cope with structural imbalances in their economies and foreign trade. Russia, in turn, has declared a program for economic diversification and modernization. In short, the Arabs need to have good working relations with Russia to strengthen their position in the global economic system. Russia needs Arab countries as much and for the same reasons.

The petroleum and gas industry is one key area for strategic cooperation between Russia and Arab countries. Russia and Saudi Arabia are world leaders in oil production. The Gulf countries possess the world’s largest proven oil reserves to date, while Russia is the world leader in natural gas deposits. One may assume that this configuration perpetuates rivalry between major producers and exporters of hydrocarbons. However, the situation may equally be used for cooperation to promote and secure joint interests and goals. The Organization of the Petroleum Exporting Countries is seeking Russian participation in the organization, or, at least, some coordination mechanism. Russia, in turn, is initiating a global gas cartel for the same purposes of coordination and promotion of joint interests.

The energy sector has huge potential for cooperation, but it would be a big mistake to develop our economic relations based only on oil and gas. Russia can work with Arabs in various fields, from agriculture to infrastructure development, from information technologies to medicine. Russian companies often underestimate the potential of Arab markets. Consider, for example, Saudi Arabia.

This kingdom has a stable political system, healthy demographics and a wealthy population with advanced consumer demands. In the World Bank’s Ease of Doing Business ranking, Saudi Arabia holds 13th place and is rapidly progressing in recent years in improving its general business environment, tax administration and legal protection. Moreover, the country has allocated billions of dollars in infrastructure development programs in an effort to further diversify its economy and improve its social system. Similar opportunities exist in other Middle Eastern and North African countries.

Russian companies can contribute to development efforts in Arab countries. Russia has expertise and experience in large-scale construction, energy and transportation projects. Water treatment, agriculture and food processing are also areas for increasing cooperation. Furthermore, Russia can offer innovative technologies and solutions in areas from construction materials and petrochemicals to environmental protection and medicine that can compete with the most advanced Western equivalents.

Finally, one may ask: What about Dubai? Dubai is a nice place and an interesting case study. It has a huge media profile but represents only a tiny fraction of opportunities available for Russian businesses in the Arab world.