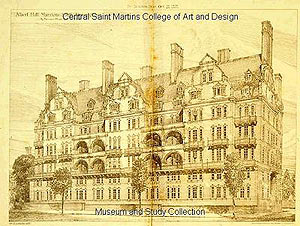 There's nothing a rich Russian likes better than a lot of bling, in the popular imagination, and the buyer of the penthouse flat at Albert Hall Mansions will have an eyeful. The agent from Harrods Estates showing me round the £8million, five-bedroom duplex near Kensington Gardens pointed out that there was “a great view of that gold Buddha thing” from the living-room window. That “gold Buddha thing” is otherwise known as the Albert Memorial.

Whether the current owner of the flat, a Russian woman with two teenage sons, is better informed about the identity of the balding gilded gentleman who meets her eye across Kensington Gore is unknown, but it's fair to say that Queen Victoria would not have been amused.

Albert Hall Mansions is an imposing edifice built between 1879 and 1886 by Richard Norman Shaw. It towers over its neighbour, the Albert Hall. It is thought to be London's first purpose-built mansion block, and is part of an area bordering the southwest corner of Hyde Park “devoted to the arts and sciences” and known as “Albertopolis”, according to the V&A, because it was established by the Prince Consort; Exhibition Road was built on the site of fields in the late 1850s to commemorate the Great Exhibition of 1851, followed by the various museums and colleges that still draw tourists and students today.

Flats for the middle classes were a new wheeze. During the 19th century, London's population increased from 1million to 6.7million. The wealthy had previously lived in houses, but by the 1870s there was limited room available in Central London for housebuilding. London, unlike Paris, had no tradition of smart apartment blocks, so Shaw built in three phases to minimise the risk that buyers would reject the idea. The Queen Anne revival style was based on English and Flemish architecture of the early 18th century: tall chimneys, leaded lights and Dutch gables re-created in beloved Victorian red brick. Both the style and the flats proved extremely popular and were copied throughout London, kicking off a trend for luxury apartment living that continues today in a more prosaic style with the Candy brothers' modern developments in Chelsea and Knightsbridge.

The penthouse at Albert Hall Mansions occupies 4,000sq ft of the fourth and fifth floors, and was originally three separate flats, knocked together by a previous owner about ten years ago. The layout is consequentially a bit odd, and the decor could do with updating.

The great thing about the flat, apart from the location, is the big living/dining room with park views. The huge Klimt-style mural, pictured above, on the wall, modern stained-glass window, dark red marble fireplace and Art Deco-style mirrored doors could all be changed. Immediately above, the master bedroom has two sets of en suite bathrooms and dressing rooms. The rest of the rooms are unremarkable - a set of beige bedrooms and an outdated kitchen.

Condition aside, it seems to be destined for a Russian buyer. According to the agent, Alex Greaves, the block is “particularly popular with Russians”, who like “the privacy, the history and the grand proportions”. Another priority, he says, is to distance themselves from the Middle Eastern community in Knightsbridge, who “prefer modern properties full of plasma screens”. Britons apparently “like freehold houses because that's what they're used to”.

Nearly three quarters of Harrods Estates' buyers come from abroad, and flats are their property of choice in London. “They are here for three months a year,” Greaves says, “and they like somewhere manageable that they can lock up and leave secure. I suppose the buyer could be a City boy who enjoys going to the Albert Hall, but that's less likely - especially at the moment.”